As The Pond Turns 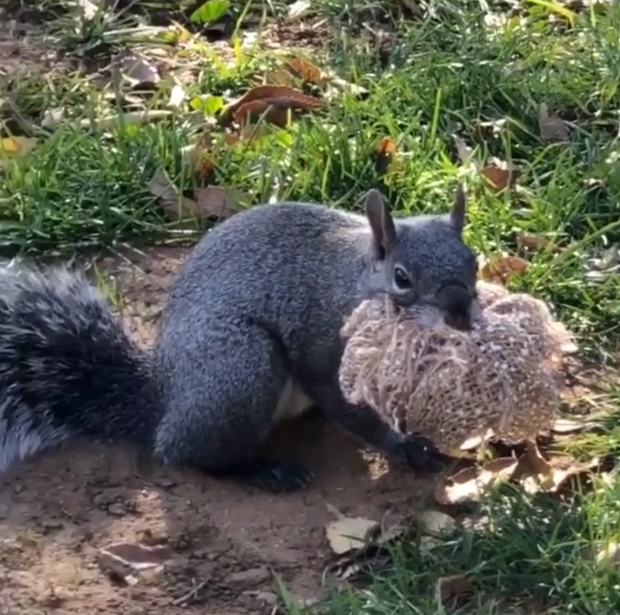 A day to be thankful for the “normal” squirrels you live with.

Once upon a time, a tiny orphaned grey squirrel came to Pond Digger Ranch. She had come from Redlands Animal Control and needed someone to care for her until she could be released back to the wild. She was skinny, and cold, and desperately hungry. We raised her with some other orphaned squirrels, and looked forward to the day we could free her.

Most orphans are returned to the location they are found, but this squirrel could not go back to the place she was found, because it was a schoolyard, and we didn’t want her interacting (or harassing) any children. Instead, we released her at Pond Digger Ranch, where the harassment began in earnest.

As she got older, she decided that everything on the ranch belonged to her, and everyone upon the ranch was there to serve her. Squirrels are incredibly smart, and she quickly learned that if she cornered one of the staff, and threatened them with her tiny teeth, bouncing in their direction, they would usually throw food to distract her, while they made their escape.

This quickly became her favorite game, and the employees began carrying “hush squirrels treats” in their pockets. I could see this was soon going to be disastrous, with customers and employees alike being tormented by this tiny, but fierce, fluffy-tailed warrior, so I ordered everyone to quit feeding her from their pockets. We selected one spot, where we would feed her each morning, far from customers and staff.

Squirrels can leap up to TEN times their body length, and our tiny grey demon quickly mastered this skill in response to her new dietary restrictions. In order to better torment employees and guests alike, she would leap off of trees, fences, even low roofs, squealing her outrage, tail on full alert, in an attempt to get the humans to throw food and run.

While portrayed in movies and cartoons as crackpots with the attention span of a rock, squirrels are actually very clever, even learning things by watching other animals or people. Our squirrel quickly learned the ranch routine, and came to expect her breakfast when the Charlotte’s Web barn animals came out each day.

The moment the goats and pigs start the morning race to the outdoor enclosures, the cacophony draws her out from wherever she sleeps, and within a minute or two, she is nipping at our heels, until we lay her meal out. Sometimes she waits for me on the porch, glaring into the house, until I run to the nut bin, while she chases behind me, tail at full fluff, squeaking her impatience at my poor time management skills.

All of my boots sport the scars from her sharp teeth, and every patch of dirt on the ranch is growing peanuts, walnuts, or cheese nips, courtesy of our fleet-footed friend. A fierce defender of her caches, if she catches you digging in one of her prime locations, you better be able to outrun her, because she will chase you down with all the fury of a mother elephant defending her newborn. Never have I seen so many grown men terrified of a 12-ounce fur ball!

I have seen her stand her ground against chickens, rabbits, crows, and ravens, screeching her displeasure as she chases them across the arena, away from her precious treasures. Studies have shown that squirrels remember where they plant their stash, and even go so far as to “fake out” perceived stalkers, pretending to bury their prize in one spot, while actually hiding it somewhere else.

In the end, you must appreciate the sheer determination, and force of will this tiny, fluffy, fierce warrior has exerted over her territory and the humans that share it. She rules with an iron will, and sharp teeth, and yet is still the cutest thing on the ranch, when she is trying to bury Eric’s favorite electrical screwdriver in the middle of the lawn.

Be sure to stop by to see her antics for yourself. You’re sure to be entertained.

Connect with The Pond Digger:

The Pond Digger on Snapchat: www.snapchat.com/add/theponddigger