Mosquito fish are compatible with Koi 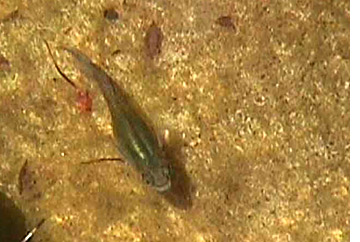 Mosquito fish (Gambusia affinis) are indispensable to modern Mosquito Control Programs. Originally introduced into California as early as 1922, they have been one of the most effective non-insecticidal and non-chemical methods of controlling mosquitoes for over eighty years. This relative of the common guppy feeds primarily upon aquatic insect forms and prefers mosquito larvae. The fish have a large appetite, and a single female which normally is larger than a male can devour several hundred mosquito larvae per day. When natural food is not available, they thrive on weekly feedings of a few pieces of dry dog food. “Mosquito fish” care is limited to protecting them from garden sprays and from chlorine or other chemicals used to clean the pond.

Gambusia affinis are compatible with most ornamental pond fish including goldfish, koi and carp and will not harm them. But, lake and stream sport fish, birds, frogs and turtles will eat them if the habitat doesn’t have adequate places for them to hide.

Gambusia affinis are hardy and can tolerate wide temperatures and water quality ranges. Although, they usually survive brief periods of nearly freezing temperatures, they may die after prolonged exposure. Sources stocked with them should be examined after cold weather to verify that the fish are still present. Gambusia tolerate heat very well and can survive temperatures above 100° F.

Female Gambusia affinis produce eggs that hatch within their bodies, releasing well-developed and very active young or “fry” into the water. Females can reach sexual maturity in only six to eight weeks, and they may bear three to four broods of young in a single season. Gambusia are prolific, producing three or four broods each summer, depending on the food supply and climate. A brood averages between 30 and 100 fry, which reach maturity in three or four months. Under optimum conditions each fish will live about a year.